It’s time to warm up your reversing skills!

We run the binary and get the following prompt:

Looks like we have a statically linked and stripped binary on our hands, let’s open it in IDA. Unfortunately, IDA does not seem to be able to identify the used libraries so we end up with a huge pile of unnamed assembly code. Anyways, let’s start at the start. We know that the start function usually calls __libc_start_main and passes the address of the main function to it as a parameter: 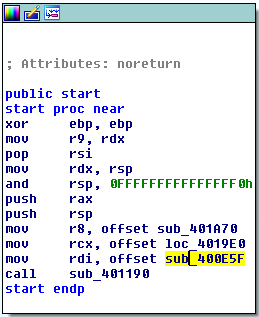 we follow the sub_400E5F function which is most likely our main function and see that it makes 2 function calls (sub_4009AE and sub_400E4F). The first function seems to be a simple read call as we find the string that was also output by the binary before we were prompted to input our value: 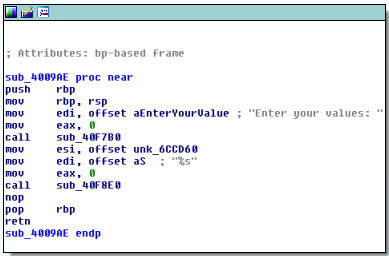 We assume that the second function then verifies our input. We follow a very long trail of function calls (luckily all functions have the same size and structure so that we can simply spam double click to get through) until we arrive here: 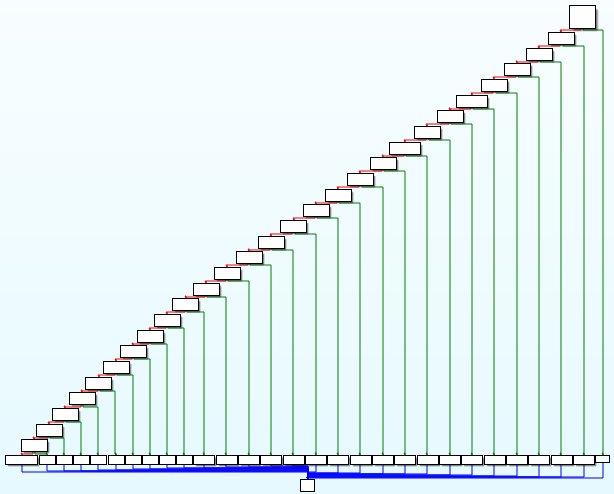 So in each block, a byte of our input is compared with a byte of the “correct” input. If the compare checks out, the program goes to the next block. If not, it simply exits. When all compares where successful, we arrive at a block that prints the string “valid!”. The problem is that the compares are not sequential but jump around in our input string. Additionally, the locations of the correct input bytes seem to be random as well and some blocks do more complicated operations to obtain the correct input byte before the compare. While we could manually write down at what position of the input the compare expects which byte, it is easier and way cooler to write a GDB Python script that does this for us.

While Python GDB is already quite nice for scripting GDB, we make it even nic by using PEDA. You need to have GDB set up with PEDA to be able to execute the following script:

And here’s how it works. We basically want the following things:

Ok, preventing jne from jumping is easy as we simply have to set the zero flag to 1 before executing it. For the cmp instruction, we thought of a nifty trick: The registers dl and al are compared where dl contains the byte of our input and al the byte of the “correct” input. Now, if we provide the binary with an input of the structure \x00\x01\x02\x03 ... \x50, each input byte is equal to its position inside the string. This way, we simply have to note down the byte in the al register at the position dl and get the flag! In the above script, we had to start from an offset (50) because the byte \x0a is interpreted as a newline character by the read call, which then terminates. We write the input bytes to a file so we can easily provide them as an input to the binary in GDB. The flag variable is initialized as a list of null bytes so that we can easily replace a character at a position (a string would be cumbersome as strings are immutable in Python).

We let the script run and receive the flag: